You are reading an old article on an old site. It only still exists so the information is not lost. Comments and mosts links are hidden and disabled.

Posted by Chainfire on 12-03-2010 at 11:30:00 - Comments: 24 - Views: 17751
Project: mmTask - Tags: Good news Marketplace Windows Mobile
Today (March 12) mmTask 1.2 was released on Marketplace. 1.0 had been available for a while, but still had some issues - as some of the comments on Marketplace also state. mmTask is a shiny and useful task switcher for Windows Mobile 6.0, 6.1, 6.5 and 6.5.3. Unlike other task switchers, it actually uses Windows Mobile 6.5+'s high resolution PNG icons automagically. Its also fingerfriendly, animated, and comes with some useful extra options.For example, you can set it to launch when you tap the middle of the taskbar, leaving space to the left for the start menu, and to the right for notification enhancements and X/OK. It can also show you both battery level and memory use meters in the taskbar. All this without even a service or the main mmTask executable being in memory (so its very resource friendly when not open). It also truly closes when you leave the mmTask screen.The 1.2 release is further optimized and thus faster (for you non-Snapdragon users), has a few bug fixes and brings additional languages: English, French, German, Dutch and Italian are all supported.Right now it is available on Marketplace for United States/English only, but you can get at it through worldview as well from most countries. During the coming week it will be released on Marketplace for all English, French, German and Dutch markets.Here's a direct link to the app on the Marketplace, however if that link actually works depends on which country you are from and whether you are logged in or not.mmTask has already made a very short appearence in the WMPowerUser video about LMT launcher here.Some screenshots: 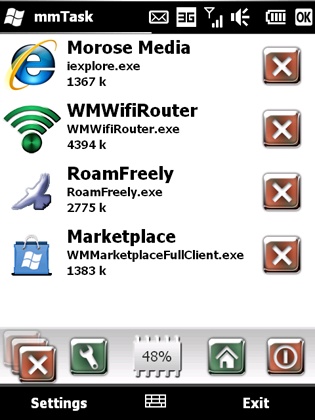 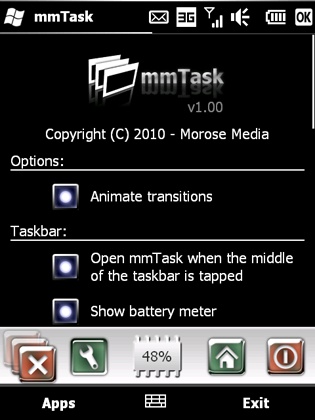 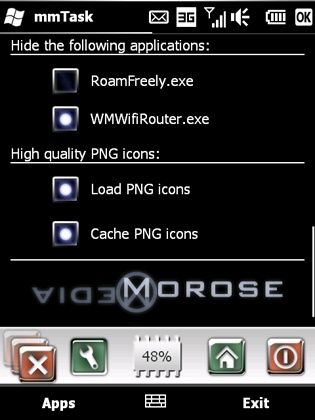 Chat at #xda-devs on Freenode